LIMA announces the results of its first-ever LIMA Annual Global Licensing Study, quantifying worldwide royalty rates and accompanying retail sales. According to the report, retail sales of products bearing the trademarked names and likenesses of cartoon characters, corporate logos and brands, major sports teams and more totaled an estimated $13.4 billion in royalty revenues and $241.5 billion in retail sales in 2014. LIMA, the leading authority for the global multibillion dollar licensing and branding industry, commissioned Brandar Consulting LLC to conduct the survey.

“Licensing is a major marketing and retail force around the globe and our first-ever global survey clearly attests to its power and reach all over the world,” said LIMA President Charles Riotto. “With this comprehensive report, we are able to provide LIMA members with the data they need to more effectively grow their brands and their businesses.” 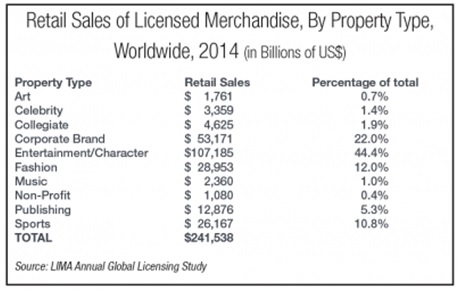 By category, the licensing industry continues to be dominated by five major sectors: Character & Entertainment, Corporate Trademarks, Sports, Fashion, and Collegiate. Together, they represented 89% of all licensing revenues in 2014. Character & Entertainment, by far the most dominant category with more than $107 billion, accounting for 44% in retail sales, was more than double the next highest category, Corporate Trademark ($53 billion, 22%). Fashion, with $29 billion in estimated retail sales or 12% of the total, was third, followed by Sports ($26 billion, 11%), Publishing ($12 billion), Collegiate ($4.6 billion), Celebrity ($3.3 billion), and Music ($2.3 billion).

In early 2015, LIMA contracted with Brandar Consulting to complete the challenging task of accurately sizing the global licensing market. The resulting analysis is a bottom-up model that sizes the worldwide licensing industry by property type and product category. The results are a compilation of market research survey data, which was fielded in April 2015, and publicly available industry data. A total of 325 companies responded to the survey: 110 licensors, 125 licensees and 90 agents/consultants. The survey was fielded online in six different languages and supplemented with in-language phone interviews that resulted in reported revenues for 24 countries representing all major geographic regions. In all, the analysis includes specific data from 490 companies spanning the globe.

The full LIMA Annual Global Licensing Study, including regional and country-by-country breakdowns for major markets will be made available later this summer. The survey is free of charge to LIMA members and priced at $750 for non-members. For information on ordering the survey