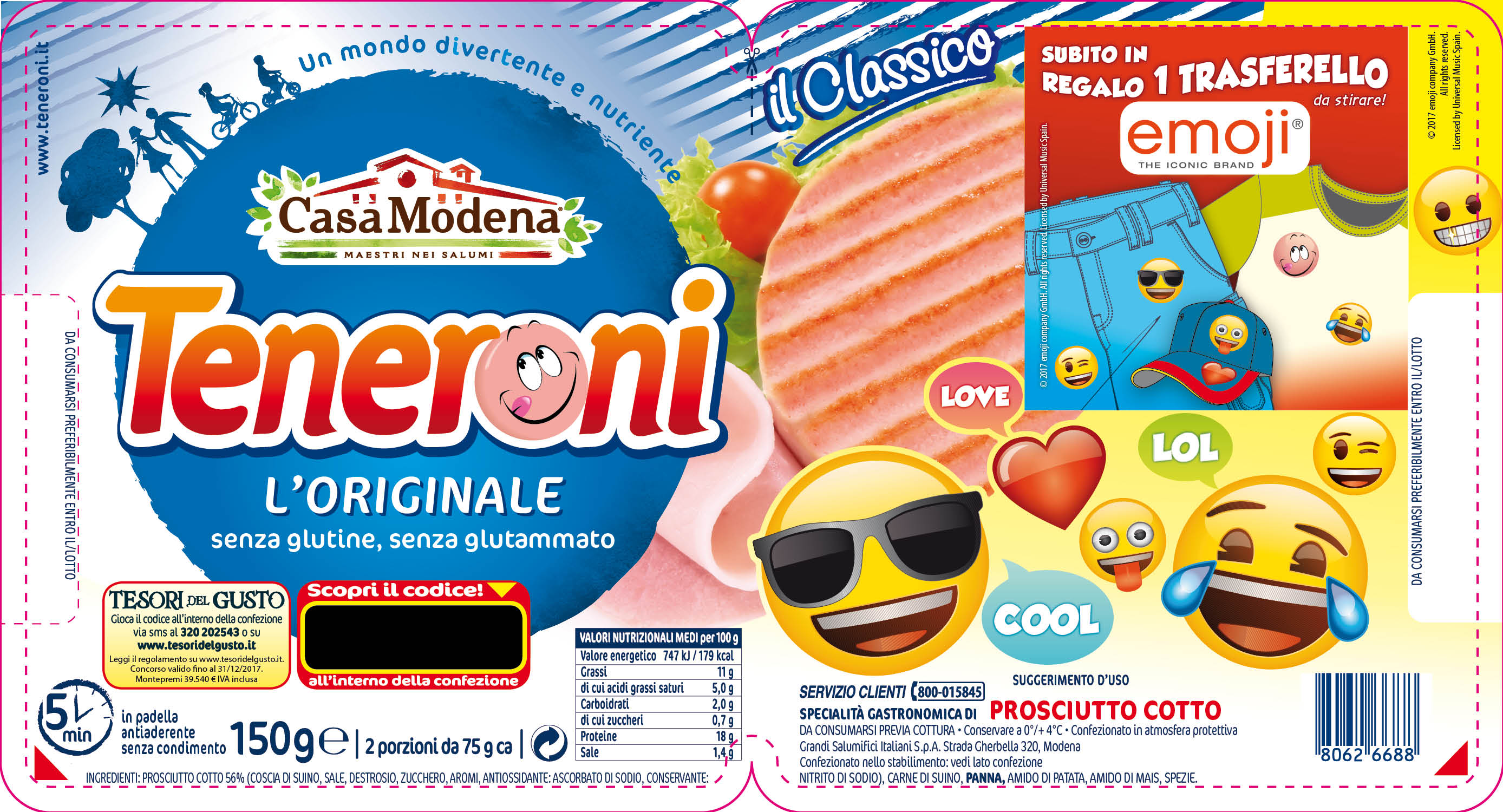 Maurizio Distefano Licensing (MD Licensing), which manages licensing for emoji® – the iconic brand in Italy, has announced the award of a licence to Grandi Salumifici Italiani, the leading name in the Italian market for deli meats and fresh ready meals, and a top international player in the quality deli meat sector.

Grandi Salumifici Italiani’s Casa Modena-branded Teneroni — the classic, tasty, gluten-free mini-hamburgers that are popular with families everywhere — will now be available in special emoji packaging. But that’s not all.

As well as special packaging featuring the world-famous emoticons, there’s a surprise: each packet contains an iron-on transfer that allows fans of all ages to ‘wear’ an emoji icon.

Casa Modena Teneroni are an easy-to-eat and popular meal for children of all ages. The tasty mini-hamburger can be cooked in a pan without fat and is ready in only five minutes. It’s a practical, nutritious and easy-to-prepare meal that meets the needs of every family. And now, there’s even more for kids (of all ages!) to enjoy with the addition of emoji.

Casa Modena Teneroni with emoji iron-ons are available now in all hypermarkets, supermarkets and retail stores.

Millions of daily users fuel the global awareness and incredible popularity of emoji. Every day we exchange tens of billions of messages, which contain almost six billion icons. And emoji® — the iconic brand has been able to build on this, transferring the feelings and emotions we share with each other through digital icons to the world of physical and tangible products.

Maurizio Distefano Licensing in Italy is part of a global network of agents that has seen the incredible potential of a brand with an appeal that crosses generations and genders and that has an enormous library of many thousands of high-resolution icons that can stand alone, be customized or form part of a bigger pattern or design. To date, the brand already has more than 330 licensed partners around the world in all major product categories.

Having signed 12 major Italian licensees in less than a year, including leading names like Bauli, Clementoni and Casa Modena, Maurizio Distefano Licensing is building a strong presence in the Italian market for this genuinely iconic brand.

Maurizio Distefano, President and Founder of MD Licensing, said: “We are delighted to have developed this partnership between Grandi Salumifici Italiani and emoji®. This promotion brings together the great tradition of a Teneroni — a timeless classic — with emoji®, a modern phenomenon that has become a classic in its own right.