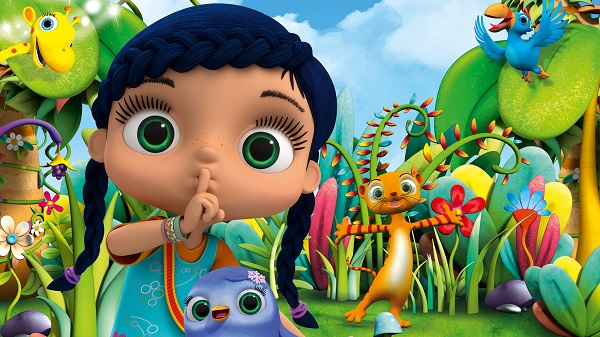 The German media companies Studio 100 Media | m4e are joining forces with MBC Group, the largest private multimedia company in the Middle East and North Africa region. The multi-platform deal comprises TV, digital media and consumer product rights for the CGI preschool series „Wissper“ (52 x 7‘) in the Middle East and Northern Africa territories. The adventures of the little girl will broadcast on MBC3 starting in July 2018.

Dubai-based MBC Group holds the basic cable and satellite free-TV-rights as well as non-exclusive worldwide basic cable and satellite free-TV-rights, limited to Arabic dubbed language only. Included in this deal are SVOD and AVOD rights on MBC’s platforms. At the same time MBC Group will act as the exclusive licensing agent for ”Wissper“ in the Middle East and North Africa region.

The first roll out of the consumer product program will be in fall 2018 with Simba Toys Middle East launching the extensive toy line.

Aimed at preschool children, “Wissper” follows the adventures of a little girl by the same name who has a very special talent – she can communicate with animals, which allows her to understand their problems and help solve them. Wissper the “animal whisperer” is a beloved character for young viewers all around the world.

“Wissper” is produced by m4e AG and London-based animation studio Cuckoo, in coproduction with Telegael (Ireland), Discreet Art Productions (India), and the German BASTEI Media GmbH, a subsidiary of publisher Bastei Lübbe AG. Season 2 with another 52 episodes of 7 minutes is currently in production and will be available this fall.