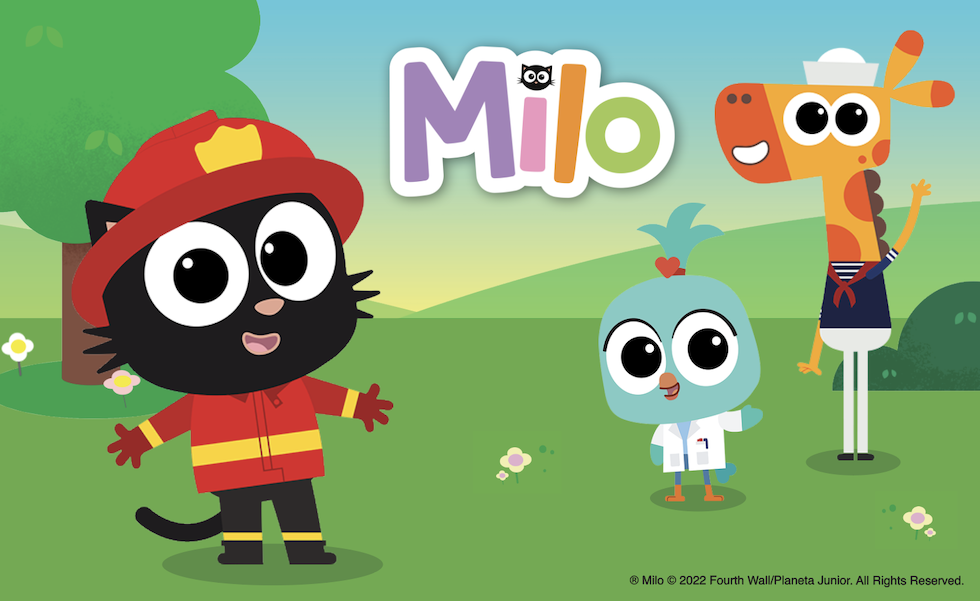 In just over a year, DeAPlaneta Entertainment has signed various deals taking the MILO franchise all around the world

The successful, award-winning preschool animation series produced by Fourth Wall in association with DeAPlaneta Entertainment has grown to include eleven licensing programmes, carving out a path on three continents and being broadcast all over the world.

The licensing programmes include a wide range of fashion-related products, including costumes and accessories by Spanish brand MOM, and a British collection of underwear and urban clothing created by Fashion UK. Character World will design a range of home textiles for the UK and Ireland.

The alliance between MILO and Tonies GmbH will see the creation of Tonies figures  of the main character with built-in musical or audio content that can be played on a Toniebox. MILO Tonies figures will be marketed in the UK and France, as well as in a number of French-speaking European countries. In Spring 2023, CYP Brands will launch a line of accessories allowing children in Spain, Portugal and Andorra to take their new favourite character to school.

Some of the most recent deals expanding this franchise include one with Educa Borrás, launching a range of educational games such as 2D puzzles in the second quarter of 2023, and with Ravensburger Verlag GbmH who will design MILO jigsaws, boardgames and crafts for pan- European distribution (in Spain, Portugal, Italy, France, the United Kingdom, Ireland, Norway, Sweden, Denmark, Greenland, etc).

The prestigious toy brand Bandai will launch the first toy line of MILO, which will include playsets & figurines, role play, vehicles, electronic educational games and plush toys in spring 2023. The agreement with Bandai as a master toy will reach territories including the UK, Ireland, Spain, Portugal, France, Germany and Italy.

Finally, DeAPlaneta has secured the global expansion of this IP through an alliance with WP Brands, Lotus Global Marketing LATAM and Lotus Brazil, the international agents responsible for respectively managing and strengthening the brand in: Australia, LATAM and Brazil.

MILO has secured significant audience ratings since its UK launch on Milkshake! by Channel 5. It’s also available for online viewing on My5, the VoD platform by the same channel. Since the programme launched in May 2021 in the UK, MILO has reached one million children aged between 4 and 15, achieving an average audience of 53,000 children and 17% share.* MILO has also achieved over 4 million views on its official English YouTube channel, and YouTube channels are also available: Spanish, Latin American Spanish, Italian, Portuguese and Polish. Together, these channels have accumulated over 9 million views and 3.7 million unique users.

MILO (whose first season consists of 52 x 11 minute episodes), is an animated series for preschool audiences with a bright, colourful look that brings a very contemporary graphic style to young children. Accompanied by his good friends Lofty and Lark, MILO uses role play to explore the wonderful world of vocations – from doctors and mechanics, to hairdressers, chefs and postal workers, introducing pre-schoolers to a variety of professions in a positive, fun way. The series’ underlying message is that all jobs are INCREDIBLE. The quality of the animation and relevance of its message helped MILO win the 2022 Best Children’s series at the prestigious British Animation Awards, and Bronze at the New York Festivals TV & Film Awards.

MILO is a preschool television series produced by Fourth Wall in association with DeAPlaneta Entertainment, a leading European entertainment company. The production was supported by the British Government’s Youth Content Fund, which is managed by the BFI and supports the creation of distinctive and quality content for young audiences. The fund aims to provide content that informs our understanding of the world, stimulate knowledge and learning, while representing diversity and alternative points of view. DeAPlaneta Entertainment owns and manages worldwide consumer products rights for the series.