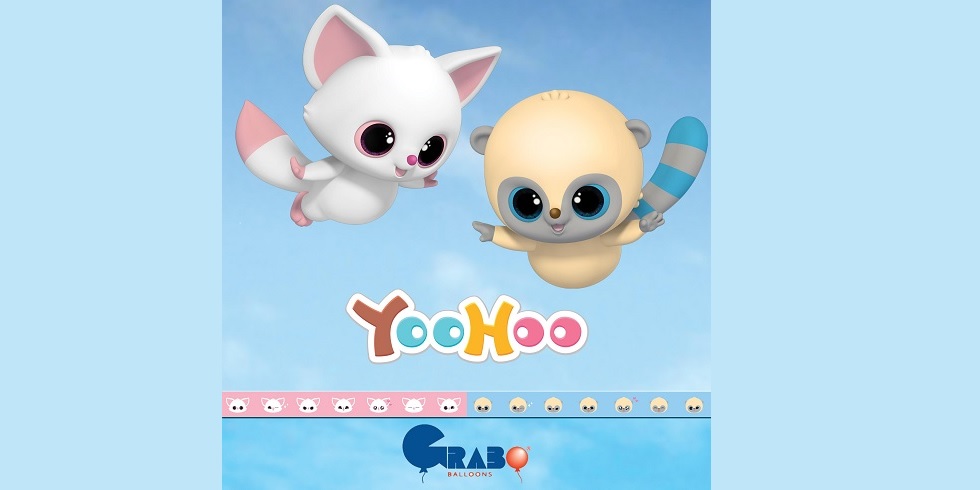 Mondo TV, a major international player in the production, distribution and licensing of animated content, has announced a new license award for YooHoo, the highly successful property based on the hit Mondo TV and Aurora World co-production for children, YooHoo to the Rescue.

Grabo Balloons, a world-leading designer and manufacturer of inflatable products, will bring YooHoo, Pammee, Roodee, Chewoo, Lemmee and many other characters from the show to colourful helium balloons that can be used for parties, for presents or just for fun. The agreement covers both Russia and Italy, as well as the Italian-speaking markets of San Marino, Vatican City and Canton Ticino. We will see YooHoo balloons flying from September 2019 in Italy and not later than spring 2020 in Russia.

Grabo is a leading name in its market. Its innovative and revolutionary inflatable products, which are made out of mylar and foil and are filled with helium and air, are sold all over the world.

The strong interest in the YooHoo brand, inspired by the multi-million selling plush and YooHoo to the Rescue, has been further boosted by a renovated plush toy line based on the new series, along with the rollout of a licensing and merchandising programme across many other categories. There are several products launching or about to launch in territories worldwide from a number of licensees, including Panini (stickers, mini figurines, trading cards) and Nuvita (baby products).

YooHoo to the Rescue also has a strong and growing presence in the Italian market, through Kimbe (live characters and events), Edizioni Playpress (magic albums), and Mondadori (chapter books and a special ‘YooHoopedia’ guide to the show and its characters) and Icam (Easter eggs).

YooHoo to the Rescue, a 3D CGI 52 x 11’ animated children’s show is a co-production between Italy’s Mondo TV and Aurora World. It launched globally as a Netflix Original Series on March 15, 2019. It is also being shown on free-to-air channels in Italy, Poland, Russia, Spain and Portugal.

YooHoo to the Rescue is a funny, exciting and beautifully designed animated series with strong environmental themes, in which YooHoo and his friends travel from the magical forest of YooTopia to Earth to confront threats to nature and wildlife, meet many different endangered animal species from around the world and make new friends along the way.

Valentina La Macchia, Mondo TV Licensing Director, says: “The continuing growth of YooHoo has been underlined by this important agreement covering two major territories. We’re looking forward to the launch of these colourful and appealing YooHoo balloons and to many more announcements in the coming months.”