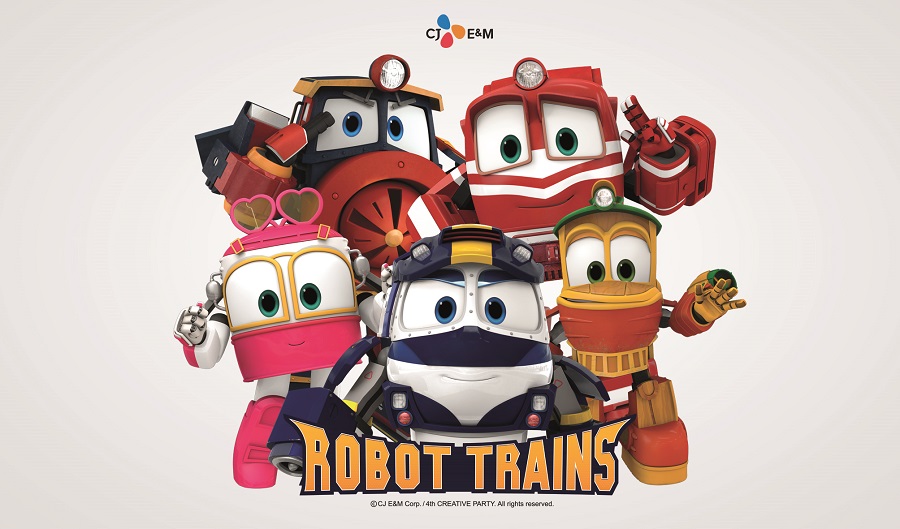 Thrills, humour, music and more with Mondo TV at BLE

Mondo TV, one of the largest European producers and distributors of animated content, will again have a strong presence at this year’s BLE. Showcasing its wide-ranging catalogue on stand D70, Mondo TV will offer a selection of attractive properties with enormous appeal to young children as well as tween, teen and family audiences. All the shows also, of course, have strong licensing potential and Mondo will be highlighting four in particular, all of them new to the European market.

With season one about to launch outside its home market, a second season of Robot Trains, the exciting animated series for children aged between three and five years, is on the way in 2018. Co-produced by Mondo and Korean content and marketing company CJ E&M, season two (52×11’) introduces Rail Watch, the trusted robot train guardians of Rail World, who transform from trains to robots to protect their home and its vital energy supplies. The show is already a big hit in Korea where it has enjoyed licensing success in toys, publishing, kitchenware, food and baby and toddler items.

The show is now attracting licensing support outside its home market. Hong Kong’s Silverlit has been awarded the master toy category. Silverlit toys will be distributed in Italy by Rocco Giocattoli, which will also be making a strong investment in marketing and promotion. Mondo TV has also finalised a number of multi-territory deals in a diverse range of categories, including publishing, games and puzzles, food and cake decorations.

Invention Story (104 x 11’) also arrives next year. It’s the tale of an intelligent, thoughtful and creative fox who, in each episode, comes up with an amazing new invention. There are plots, conflicts and rivalries, as well as funny and engaging characters — but this show also offers something different. By following the little fox in his efforts to build each new invention, the young audience will find out more about science and how it works.

Such is the enormous potential of Invention Story across both play and learning-related licensed product that co-producers Henan York Animation and Mondo TV have already committed to five series for a total of 520 ep x 11 min. This is an important development. A broadcast reach that will include many of the free-to-air and pay TV broadcasters of all major countries, combined with a five-series commitment, will allow partners to develop a successful long-term licensing programme.

Eco-friendly themes such as environmental awareness and help for threatened species are an important part of the show’s appeal. But the show’s wide range of characters allows it to speak to individuals of different ages, nationalities and characteristics, enhancing its audience appeal and the diversity and collectability of the brand. Not surprisingly, the show has been attracting strong licensee interest ahead of its launch. In fact, Mondo TV recently announced a global licensing and merchandising agreement for YooHoo & Friends with Panini SpA, a global leader in the production and distribution of stickers and trading cards.

Fresh from a successful launch across Latin America and a well-attended licensing summit at Licensing Expo in Las Vegas, Heidi, Bienvenida a Casa (60 x 45’), Mondo’s first live action show, produced by Mondo TV Iberoamerica along with Alianzas Producciones, is now showing off its potential for European licensees and broadcasters. The show has already enjoyed great success in Latin America on Nickelodeon and will soon be broadcast by the region’s leading free-to-air broadcasters.

Mondo TV Iberoamerica group and Alianzas Producciones have already agreed to co-produce two more seasons of Heidi (a three-series total of 180 45-minute episodes). Season two has begun filming. In the second season — called Heidi Bienvenida al Show, Heidi moves back to the big city, lured there thanks to an ingenious plan dreamed up by her aunt Dete and the eccentric Mr. Conejo. She makes new friends and discovers new passions — she even discovers a talent for creating perfumes! She will also take on a new challenge: to help Coco overcome her fear of singing and dancing in public, and to find and free the artist within. There’s magic, music, excitement, comedy, romance and, of course, more and more of Heidi’s extraordinary hats. All this, plus some very special guest stars. This new story is a big show – in every sense!

A licensing programme, for which a number of agents have been announced across the Americas, is already under way in Latin America. Among the first licensees is Panini, which has signed a worldwide deal to produce a wide range of Heidi-inspired books, stickers and magazines.

Mondo will also be highlighting the continuing success of Sissi the Young Empress. The adventures of the free-spirited empress who resists etiquette and the duties of the court to follow her heart, was a big success with its target audience of young girls. Season two is now airing in a number of markets and a third 3D series and an expanded licensing campaign are on the way. Another 3D CGI show due soon, Cuby Zoo (52 x 11’), about a group of cube-shaped animal toys who come to life has strong potential in a number of licensing categories.

And that’s not all. Mondo TV has just announced a three-year agreement to handle licensing in Italy for seasons one and two of Metalions on behalf of Young Toys of Korea. Metalions is a new animated series totaling 104 episodes x 11 minute over the first two series.

For more on this show, and all the thrills, humour and music on the way soon, why not visit stand D70?

Matteo Corradi, Mondo TV CEO, says: “This selection of shows — and the whole Mondo TV portfolio —emphasises our strength across an enormous variety of programming and licensing for young audiences. In addition, with the success of Heidi, Bienvenida a Casa, we have made clear our commitment to expanding into live action as well as further boosting our leading name in animation. We’re looking forward enormously to an exciting and busy BLE.”