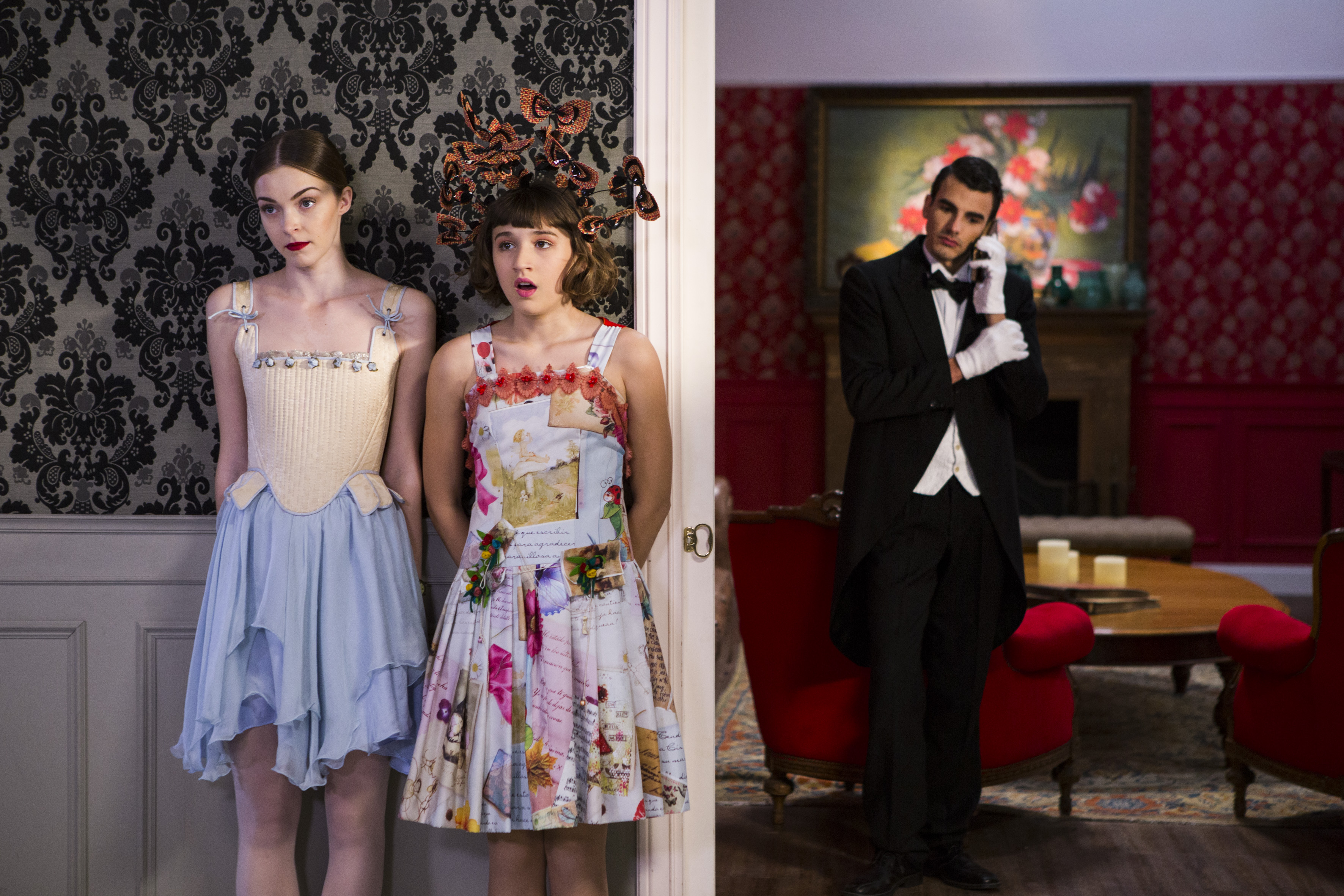 Mondo TV shows its strength in production, distribution and licensing at BLE 2018

Mondo TV, one of the largest European producers and distributors of animated content, is getting ready for a busy BLE as a number of major properties build on their success, prepare for launch or are introduced to licensing and broadcast communities for the first time. Robot Trains, YooHoo to the Rescue, Invention Story, Heidi Bienvenida, Sissi the Young Empress and a major new project MeteoHeroes can be found on stand D70 – all of them underlining Mondo TV’s strength in entertainment production, distribution and licensing to children, tweens, teens and families.

MeteoHeroes, is the newest addition to MondoTV’s roster at BLE. A project announced this summer, it’s a Mondo TV co-production with MOPI (Meteo Operations Italia – better known to the public as the Epson Weather Centre), of a new TV series that will consist of 52 episodes of seven minutes each. It is scheduled to launch in spring 2020.

The show addresses issues like climate change, ecology and respect for nature through the amazing adventures of six children who transform into superheroes with power over the weather. This is the first animated series aimed at an international audience that deals specifically with the topic of climate change. There’s very strong potential for this new series in both consumer products and school-and-learning-related items. In fact the series has already established a link with a pilot project called Meteo-Home – an innovative project involving Il Club del Sole and Epson Meteo, offering eco-friendly holiday homes for families where children are welcomed by MeteoHeroes. The delightful stars of MeteoHeroes – superheroes and ordinary kids at the same time – will be reaching out to new generations – the ‘digital natives’ – and raising awareness on the subject of climate change and energy saving.

Interest in the project has already been expressed by a number of broadcasters and potential licensees. Among key partners already signed up for this exciting project is publishing house Giunti with an exclusive agreement covering press and digital master publishing for Italy. Giunti products will accompany the TV launch of MeteoHeroes.

A special launch press conference at MIPCOM is planned for MeteoHeroes, where attendees can find out more about Mondo TV’s plans for this exciting and innovative new concept, along with the extraordinary success of many other Mondo TV properties.

Co-produced by Aurora World Corporation and Mondo TV, the 3D CGI HD show YooHoo to the Rescue (52 x 11’) is the focus of a major spring 2019 launch as Netflix plans a worldwide Netflix Original Series release of the environmentally focused adventure series. This will be followed by free-to-air release in Italy, Spain, Portugal, Russia, Poland and France. Among a large number of deals already agreed, Panini is on board for global production and distribution of stickers and trading cards, as is Apple Beauty for fragrance, bath and body products. Pan-European deals include Nuvita for baby care products across the Italian, Spanish, Portuguese and UK markets, and Dolfin for chocolate and bakery products. Italian agreements include Edizioni Playpress for magic albums in 2019, and Kimbe, for live characters and events, while Mondadori has been signed up to publish four story books, one super sticker book and a special ‘YooHoopedia’ guide to the show and its characters.

The inspiration for the show – 80 million plush sold since the brand arrived in 2007 – comes from brand owner and master toy plush licensee, Aurora World. The Aurora plush line will be renewed to reflect the style of the show, which, thanks to its eco-friendly themes such as environmental awareness and help for threatened species, will highlight many new characters. Another strong toy focus will be the transformational gadgets that help the seven main characters rescue animals.

Invention Story is the tale of Kit, an intelligent, thoughtful and creative fox who, in each episode, comes up with an amazing new invention. This is a major commitment for co-producers Mondo TV and Henan York Animation. The first season – 104 episodes – is on the way, but 520 episodes are planned over five seasons. This is a show with a lot to offer licensees: it’s funny, entertaining and character-rich. It’s also instructive and educational, with Kit attempting to build a new invention in every episode. Kit’s inventions and tools, along with the distinctive characters, personalities, houses and locations, all add up to a strong offering in toys for play and learning as well as an attractive property for publishing (Edizioni Playpress is already signed), all underpinned by a long-term commitment that is attracting broadcast interest in a wide range of territories, notably CCTV in China and DKids in the Middle East. Agreeing a master toy partnership will be a strong focus of BLE for Mondo TV.

Season one (32 x 11) of Robot Trains is showing all over Europe. Season two – for which Mondo is again agent but also co-producing with Korean content and marketing company CJ E&M – arrives in early 2019.

Licensing activity for Robot Trains is already strong: in fact all major categories are now covered. Master toy licensee Silverlit will work with toy distributors Rocco Giocattoli in Italy, Bisak in Spain and Concentra in Portugal. Among licensees on board for Italy are Grani & Partners for 3D figurines and collectible Robot Trains products, Preziosi for confectionery and snacks, La Feltrinelli for books, Ravensburger for puzzles and memory games, Modecor for confectionery decorations, Grabo Balloons producing helium balloons and Kimbe for live characters and events. Stickers and trading cards from Panini, carnival costumes, party sets and summer toys produced by CIAO, personal care products from Admiranda and paper handkerchiefs from Clean Paper add up to an impressively wide-ranging licensing portfolio – with many other agreements under discussion or about to be announced. In Portugal, where Kay, Alf, Duck, Selly and Victor and their friends have been on air since 1 June, a Q4 bed linen deal is planned, along with the announcement of a partner for live events. Existing agreements include deals with Kstationery for back to school and Comansi for 3D figurines.

Spanish activity has been further boosted by the show’s arrival on CLAN TVE on 27 August, where a strong promotional push counted down to the show’s launch in the week leading up to its arrival. During its first week on CLAN TVE two episodes of Robot Trains were broadcast per day starting at 5.55pm. On weekends, at the same time, there is a rerun of two shows back to back on both days. From the week of the 3rd of September, the afternoon slots have continued, with repeats every morning – including weekends.

Mondo’s plans are to replicate across Europe the established success of the huge licensing programme in Italy, Spain and Portugal, which includes toy distributors in a number of countries for master toy licensee Silverlit. Therefore the focus in London is to build a network of Robot Trains agents. In fact an agency is about to be appointed for the UK, where the show has enjoyed strong ratings on Cartoonito.

At BLE Mondo TV will also focus on Robot Trains season two, broadcasting from early 2019. With a new format and more episodes (52 x 11), the show will offer new characters, new locations and an environmental and educational storyline through a focus on different energy ‘worlds’ (Water, Light, Wind and Fire) that will combine with the show’s established action and comedy to amazing effect.

After conquering its home markets in Latin America, season one of Heidi Bienvenida is performing strongly in Italy. Mondo’s first live action show, produced by Mondo TV Iberoamerica along with Alianzas Producciones, is becoming something of a phenomenon for pre-teen and teen audiences in Italy, where the popularity of the Heidi YouTube channel and in particular meet and greets with the stars reflect the success of the show on Rai Gulp.

Live events too have played a strong part in Heidi’s growing popularity. In fact, during an event at Mirabilandia – the biggest theme park in Italy – Chiara Francia (who plays Heidi), Tiziano Francia (Gnomo) and Victorio D’Alessandro (Toro) opened for over 3,000 attendees at the Stuntman show in the Stunt Arena, in addition to two daytime events at the park theatre.

The three cast members – and Marcela Citterio, author of Heidi Bienvenida – also appeared at the 48th Giffoni Film Festival, the only cinema and audiovisual festival in the world made by and for children, for a meet-and-greet event. In addition to the screening of a preview episode of Heidi Bienvenida, a meeting with the press and various interviews, the stars of Heidi Bienvenida danced and sang on the Blue Carpet in front of a young and very enthusiastic audience. Fans were also able to catch up with Chiara Francia at the Mondadori display stand and get their copies of the new Mondadori Heidi books autographed.

The first Heidi books – a creative book reflecting some of the art and craft themes in the show, and a fan guide to all the characters in the TV series – will soon be joined by a singalong book and CD starring Deborah Iurato, who performs the theme song and who will be contributing performing tips.  A 25-song soundtrack CD from Sony is next to be released, by mid September.

But these are not the only licensed products at, or soon to reach, retail. All are part of a successful Italian licensing campaign for Heidi Bienvenida that also includes Panini with a worldwide deal to release a sticker album in conjunction with a Heidi Bienvenida magazine in the back to school period. There are also themed events for shopping centres from Echo Entertainment, epiphany socks and confectionery products from Walcor and a special crossword-format publication from Edizioni Play Press. Role play toys and arts and crafts are among the next target categories. There’s also a growing number of promotional, marketing and merchandising activities that Mondo TV is developing with partners, which will further contribute to the success of this captivating franchise. And season two is on the way – plus a Heidi Bienvenida film. Announced at MIPTV 2018, this is the first feature film in the history of Mondo TV.

Mondo will also be highlighting the continuing success of Sissi the Young Empress at BLE. The animated adventures of the free-spirited empress who resists etiquette and the duties of the court to follow her heart has been a big success with its target audience of young girls. Canada, Germany, and Austria are the latest territories to launch season one. From June this year, Sissi the Young Empress is appearing on Club Illico, an SVOD subscription service and one of the leading Canadian digital platforms in the French language. Mondo TV has also announced a three-country deal with Nickelodeon that brings a German-language version of Sissi series one to Germany, Austria and Switzerland for a five-year period starting in July. These two agreements follow the recently announced major three-year deal with DBS children’s channel JeemTV, through which Sissi has been showing in Arabic from July 2018 in a number of countries.

Season two is now airing in a number of markets. A third series in 3D completely renews the content and format and comes with an expanded licensing campaign. Active Merchandising will be partnering Mondo for licensing in Germany. A strong licensing campaign, which already includes puzzles and board games, personal care products and carnival costumes, is to expand categories and regions covered.

Matteo Corradi, Mondo TV CEO, says: “This is a show where we are building on recent licensing successes with Sissi, Heidi and Robot Trains, all of which have strong potential for expansion. But we’re also looking forward: the imminent arrival of YooHoo to the Rescue and Invention Story and an exciting new concept in MeteoHeroes all promise major opportunities to licensing partners in many, varied categories – as visitors to D70 will find out!”