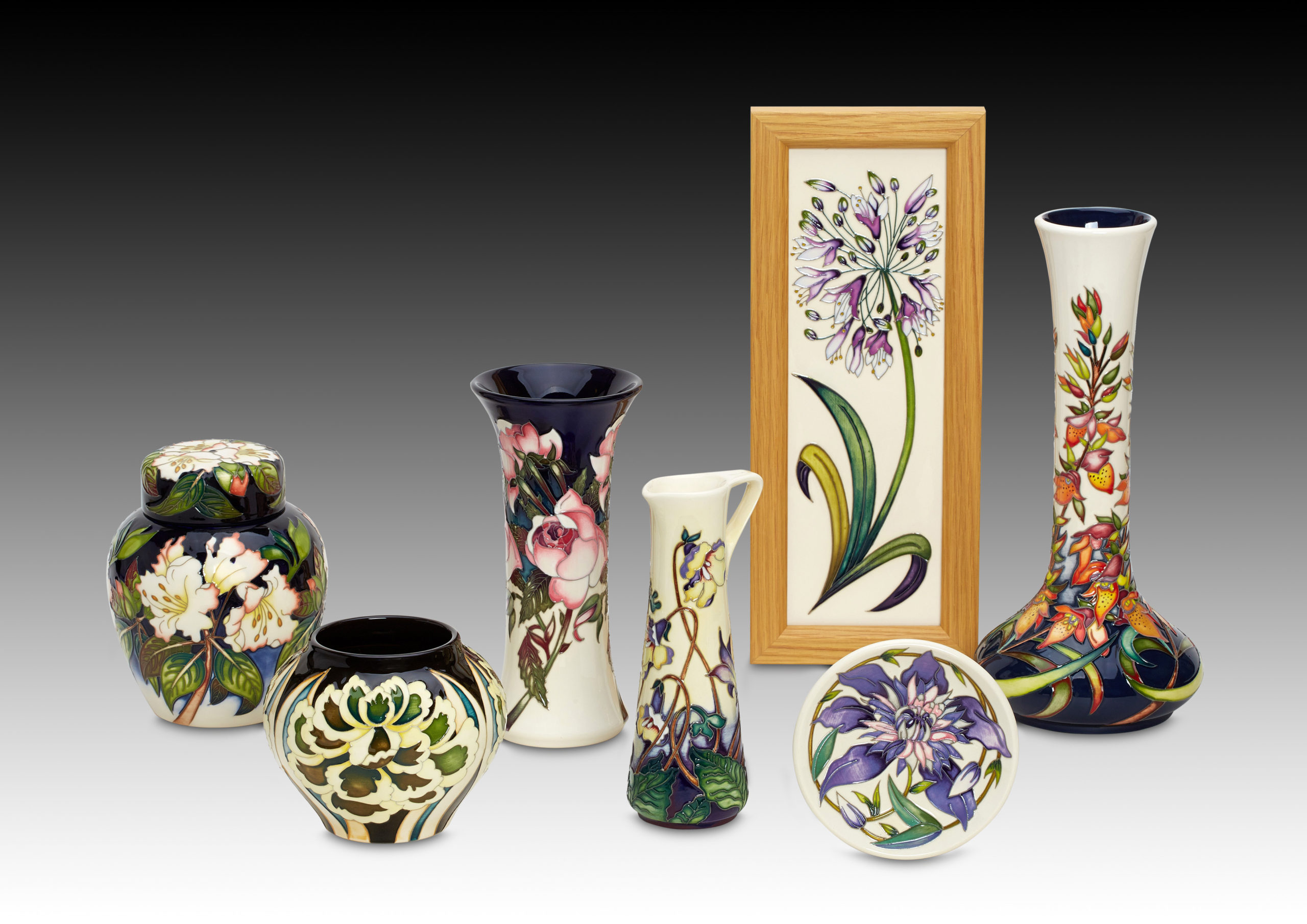 The Royal Horticultural Society (RHS) has announced the launch of a brand-new collection of art pottery from valued RHS licensing partner Moorcroft, a renowned producer of heritage art pottery and a leading name in the world of ceramic design

The new collection – four vases, a jug, a plaque and a coaster – is the work of celebrated Moorcroft designers Nicola Slaney and Emma Bossons FRSA. It contains both limited edition and numbered items and is inspired by the annual RHS Chelsea Plant of the Year Award, a competition launched in 2010 to promote the continuing work of breeders and nurseries in producing improved and exciting new plants.

For the RHS Chelsea Plant of the Year collection, the Moorcroft design team considered all of the 20 shortlisted plants and wove elements of some of these extraordinary achievements into a collection to showcase their beauty.

The result is seven outstanding creations, including, of course, ceramic representations of the winner and the two runners-up as well as of four of the shortlisted plants.

The RHS Chelsea Plant of The Year 2019 Sedum takesimense ATLANTIS (‘Nonsitnal’), was originally found on the volcanic Korean island of Ulleungdo. It has inspired a vase with a botanical design in which the rosettes of serrated green leaves erupt out of a blackened-ash background.

In second place was Digitalis × valinii ‘Firebird’, a foxglove, whose flowered spikes in warm reddish-pink with apricot tones adorn the vase that celebrates it.

Agapanthus ‘Fireworks’ (‘Mdb001’) took third place and on the plaque of the same name the designer has injected drama with a regal indigo colour palette.

The four shortlisted plants represented are, on a jug, Streptocarpus ‘Lemon Sorbet’; on a vase, the multi-layered bloom of Rosa EUSTACIA VYE (‘Ausegdon’); on a vase, a compact shrub, Rhododendron ‘Jessica de Rothschild’; and, on a coaster, Clematis ‘Kokonoe’.

The items are available in limited editions of from 25 to 50 or in numbered editions that will be discontinued when the collection closes. Heights vary from 10cms for Atlantis and Kokonoe to 28cms for Firebird, while the plaque is 10cm wide and x 30.5m high.

Each of the RHS Chelsea Plant of the Year collection pieces will include the designer monogram and full signature along with all Moorcroft backstamps of authenticity and the Royal Horticultural Society’s backstamp to show its official seal of approval.

The method of creating each piece made by Moorcroft originated with William Moorcroft in 1897 and is almost exactly the same today. Supported by designs from the world-famous Moorcroft Design Studio and the skills of a dedicated workforce of artists, craftsmen and craftswomen, Moorcroft pottery sells all over the world.

Moorcroft and the RHS have collaborated a number of times in recent years, notably through the RHS Rose Bouquet Collection, six designs, based on famous roses, the RHS Beatrix Stanley Collection, with designs based on the floral watercolour studies of the gardener and painter Lady Beatrix Stanley, and Chelsea’s Choice, a vase celebrating the extraordinary snow-white hydrangea that was awarded RHS Chelsea Plant of the Year 2018.

Catherine Gage, Director of Legal & Marketing, W Moorcroft Ltd, says: “For this collection we certainly gave our top designers an ambitious and challenging brief: to capture the essence of not one but seven award-winning plants in a demanding format on behalf of world’s leading gardening charity.  We, like the RHS, are thrilled with the results.”

Cathy Snow, RHS Licensing Manager, says: “Moorcroft is widely considered to supply some of the finest art pottery in the world today and for this collection has once again demonstrated that excellence by capturing the exceptional qualities that put these seven plants on the RHS Chelsea Plant of the Year 2019 Award shortlist. We are delighted to be continuing our long-term and productive association with Moorcroft.”