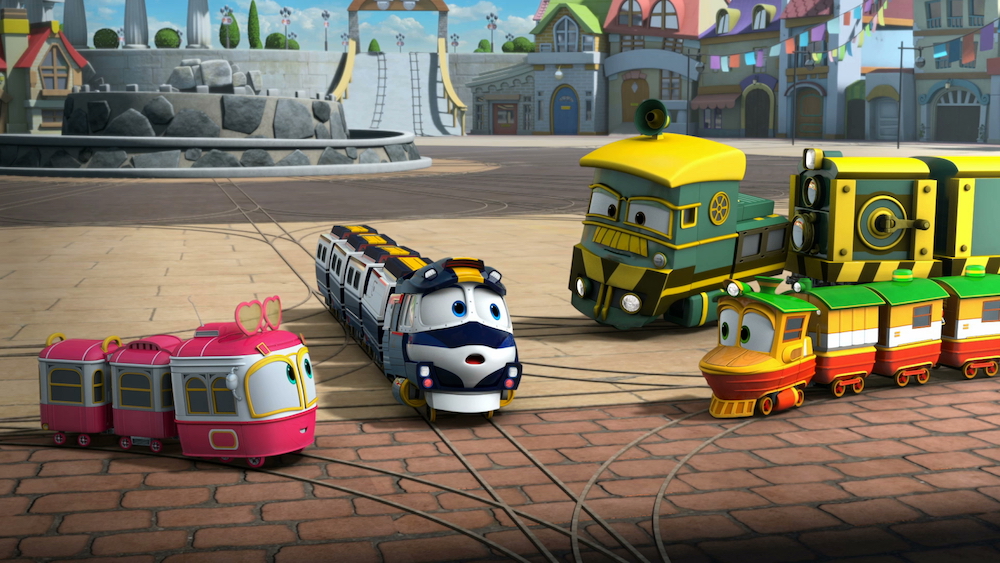 Mondo TV, one of the largest European producers and distributors of animated content, has announced a number of important breakthroughs in the Iberian market for animated kids’ show Robot Trains in both broadcasting and licensing.

Broadcast highlights include the news that a launch on DTT channel Clan TVE is imminent in Spain, following hard on the heels of the June launch of the show on Portugal’s children’s cable and satellite channel Canal Panda. TV distribution in Iberia is managed by Mondo TV Iberoamerica, a distributor and producer of audiovisual content operating in Spain, Portugal, Latin America and the Spanish-speaking United States.

Licensing interest is growing fast in both countries following the announcement of the Clan TVE launch, which takes place at the beginning of September. In Spain Panini is already signed to launch a sticker album in January 2019, with other titles to follow, while Comansi, a leader in 3D figurines for children, will launch a figurines range in Q22019 and Gedis will bring Calamity Car and 3D figurine versions of Robot Trains characters to kiosks, starting from BTS 2018.

Bizak is distributing the toy range in Spain on behalf of master toy licensee Silverlit. To date the sell-in of the toy line has gone extremely well and Robot Trains toy distribution is widespread in all main retail outlets. Bizak will support the launch – products will be on shelves in time for the 2018 back to school season – with a strong marketing campaign. Licensing announcements for apparel, board games, activity books, playing cards soap bubbles, wrapping paper and back to school categories are due soon, with outdoor toys and arts and crafts deals expected to follow later in the year.

In Portugal, where Kay, Alf, Duck, Selly and Victor and their friends have been on air since 1 June, a Q4 bed linen deal is planned, along with the announcement of a partner for live events. Existing agreements include deals with Kstationery for back to school and Comansi. Concentra in Portugal will distribute the toy range on behalf of master toy licensee Silverlit. With product on shelves from spring 2019, sell-in is again strong across toy retail.

These are the latest in a number of major announcements for Robot Trains, an exciting 32 x 11’ animated series for children aged between four and seven years set in Train World, where all the citizens are trains – but some can transform into robots!

The show, produced by one of South Korea’s largest content and marketing companies, CJ E&M, is already a big hit in Korea where it has enjoyed licensing success in toys, publishing, kitchenware, food, back to school, stationery and more.

Robot Trains is distributed and licensed by Mondo TV in a number of territories across Europe, including Italy, Spain and Portugal, the Middle East and the Pacific region. Mondo will not only distribute and license the second season of Robot Trains in all these territories but will also be partnering with CJ E&M to co-produce the new series.

The first series of Robot Trains already broadcasts on a number of leading free-to-air channels, including Cartoonitoin Italy, Gulli in France, Canal Panda in Portugal, Carousel in Russia, Cartoonito UK and Dkids in the Middle East.

Robot Trains was ranked the number 1 show on Cartoonito UK during launch week (it launched on Monday 4 June), and is so far rated the channel’s number 2 series of the year. On the Cartoonito UK website, it has, since 1 June, been the number 2 show page. On Dkids, where it broadcasts in Arabic, Robot Trains season 1 premiered on 17 June with a double episode. And, of course, the show will be arriving soon on ClanTVE in Spain. More territory announcements are imminent.

Licensing activity for Robot Trains is also strong in a number of territories, where confectionery and snacks, books, puzzles, confectionery decorations, live characters and events, stickers and trading cards, carnival costumes, personal care products and paper handkerchiefs are just some of the items in shops or soon to appear at retail. Master toy licensee Silverlit of Hong Kong is already working with toy distributors Rocco Giocattoli in Italy, Bizak in Spain and Concentra in Portugal.

Valentina La Macchia, Director of Consumer Products at Mondo TV Group says: “The licensing program for Robot Trains is strong in many markets already and we are enormously excited about the prospects for the Iberian market where the impressive commitment of leading TV channels and powerful marketing support from toy distributors promise an amazing impact for this fantastic show at retail.”

Julia Gutierrez, Licensing Manager at Mondo TV Iberoamerica says: “We are thrilled to announce the arrival of Robot Trains on Clan TVE, the major TV channel for Kids in Spain from the beginning of September with 32 episodes full of adventure, comedy and action. Thanks to the commitment of Clan to Robot Trains we are able to bring to a new generation of kids a series full of energy and strong environmental values that has been a proven success in many countries across the world.”