Trolls to star in the EL CORTE INGLES autumn campaign

Thanks to a collaboration between Planeta Junior, leading European children’s and youth entertainment company, leading Spanish retailer El Corte Inglés and DreamWorks Animation’ s Trolls, the Trolls will be the stars in the El Corte Inglés “8 Golden Days” campaign, infusing all of the chain’s Spanish stores with their infectious happiness and adventurous spirit from October 21st to November 13th.

Thanks to the promotion starring these loveable, charming characters from the upcoming feature film Trolls, customers who buy Trolls products worth over 20 euros will receive one free ticket to see Trolls in cinemas this Autumn.

In addition to a presence in the over 1.5 million copies of the “8 Golden Days” catalogue, the Trolls will have a visual presence at the chain’s department stores through exclusive spaces dedicated to the Trolls featuring these colourful, happy characters at all El Corte Inglés stores, a presence in all product categories and a photocall where the youngest members of the family can have their photo taken with their favourite characters. Four versions of the Hasbro toy will also be available exclusively at El Corte Inglés stores. 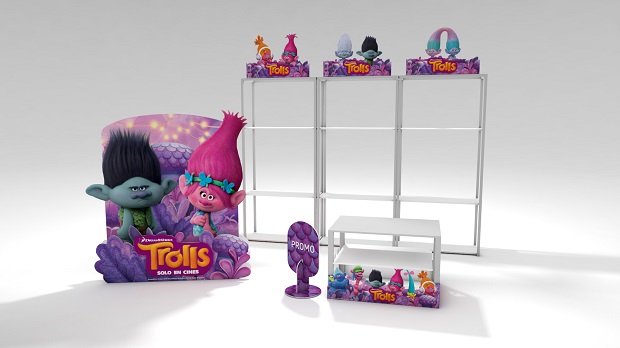 The Trolls’ presence at department stores will also feature over 1600 ‘trollified’ alarms at all Spanish stores from 2nd November, and announcements at 80 ECI stores. The Trolls will also be on the streets in November thanks to a commercial that will be played on the 200 m2 Live Callao LED screen in Madrid. Last but not least, these colourful, happy creatures will also be present in El Corte Inglés digital communications and social network pages as well as on the company’s official website, which will include a space dedicated to the Trolls among other actions.