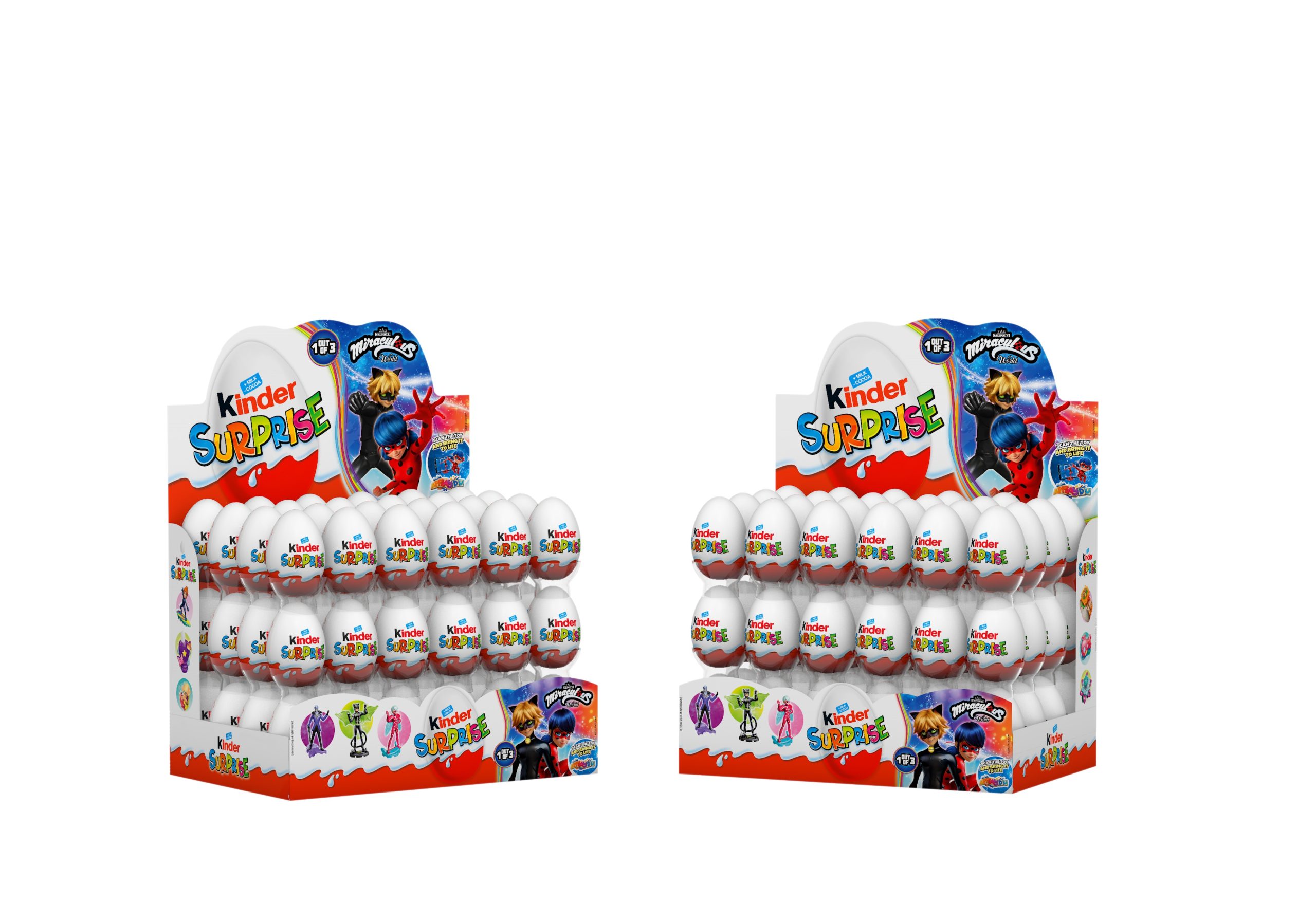 ZAG and Ferrero Partner for New Miraculous™ Promotion Across Europe

Brokered by ZAG and DeAPlaneta Entertainment, ZAG’s Miraculous Spanish co-production partner and licensing agent, the promotion kicks off just time for the holiday season with Ferrero’s Kinder Surprise Maxi 100g egg featuring eight characters from the globally loved brand.  They include Ladybug, Shadow Moth, Rena Furtive, and Vesperia from the Miraculous TV series; Astrocat, Cosmobug, and Eagle from the Miraculous World: New York – United HeroeZ animated special, and Renren from Miraculous World: Shanghai – The Legend of Ladydragon. “Ferrero’s Kinder Surprise eggs continue to be as popular today as ever with children and adults alike,” commented Hyde Schram, Vice President, Global Partnerships at ZAG, who reports to Julian Zag, EVP, Global Operations and Head of Consumer Products.  “With this new promotion, we are once again combining two powerful brands to bring these tasty chocolate treats and beloved characters to existing and new audiences across Europe.”

“Ferrero’s chocolate and confectionery products are well-known among families and children and their marketing strategy is one of the finest of the market,” added Sara Redolfi, Category Manager at DeAPlaneta Entertainment.  “We have been collaborating with Ferrero since 2018, and they continue to be a strategic partner for the Miraculous™ – Tales of Ladybug & Cat Noir brand. We are confident that the target audience will respond enthusiastically to the promotion.”

Miraculous™ – Tales of Ladybug & Cat Noir continues to be everyone’s favorite superhero story and is ranked by IMDB amongst the Top 10 Best Animated Shows in the last 20 years. Available in over 120 countries, season five of the series started to roll-out this fall, to be followed by the highly anticipated $US100M+ animated feature to be supported by several yet unannounced cobranded partnerships with some of the most influential companies across the globe across numerous consumer products categories.  With a core audience of 52% girls and 48% boys ages 6-12, and a massive fan base of young adult “Miraculers,” (ages 15-25), Miraculous has become a digital planetary craze with over 30 billion views on YouTube (authorized and user-generated content); over 200 million downloads of the official app; and over 400+ million plays on Roblox. Over 280 million products have been sold and retail sales have surpassed US$1B worldwide to date.   Miraculous is the winner of 29 awards and was a finalist for Best Licensed Brand among perennial classics in the Licensing International Excellence Awards, 2022.

The 3D-CGI-animated superhero aspirational action-comedy series Miraculous™ – Tales of Ladybug & Cat Noir, created by ZAG and co-produced with Method Animation (Mediawan Kids & Family), follows the adventures of two seemingly typical teens with secret identities, Marinette, and Adrien, who magically transform into superheroes, Ladybug and Cat Noir. As secret superheroes, Ladybug and Cat Noir are partners in the action. But in the daytime, Marinette is just a normal girl, living a normal life. Cat Noir will do anything to support and impress Ladybug but does not know this is Marinette from his class. Marinette, the regular girl, in turn dreams of Adrien and simply gets little response. When evil threatens Paris, their beloved City of Lights, can they beat the unexpected villains?