With a flourishing fan base that’s continuing to expand with each episode, FremantleMedia is launching a range of licensed products inspired by the American Gods TV series.  Based on Neil Gaiman’s award-winning novel of the same name, American Gods premiered in the U.S. on STARZ on April 30, 2017.  The TV gods smiled upon the network when American Gods debuted to the most Live+SD series premiere viewers amongst all current STARZ Original series, and set a network record for the highest L+7 series premiere viewers. Internationally the series premiered on Amazon’s international Prime Video service on May 1, 2017, where it is currently the most watched show in the U.K. on the streaming service.   Last week it was announced that STARZ has picked up a second season of the deity-driven, critically acclaimed original series.  Amazon Prime Video also followed suit and will make the second season available to more than 200 territories outside the U.S.   “There has been so much excitement and anticipation for American Gods that we wanted to offer our fan base a collection of product in celebration of the first season,” said Andrea Brent, Senior Vice President of Licensing & Franchise Management, FremantleMedia North America.  “An expanded offering is currently in development and will be available in 2018 to support the recently announced second season.”

For true believers that want to wear their allegiance, Ripple Junction has created a line of men’s and women’s graphic tees for specialty retailers in the U.S.  Select designs will also be available to consumers on Amazon.  Dark Horse Deluxe, a division of Dark Horse Comics, is developing a host of novelty and collectable products that will be available worldwide including a sculpted coin replica, as well as a pint glass set and shot glass set commemorating the infamous watering hole of the Gods, Jack’s Crocodile Bar.  Rizzoli will be launching a 2018 wall calendar that will be available in September at Barnes & Noble, Amazon, Go! Calendars, and more.   In addition, Trends will release a series of posters and bookmarks carrying the iconic American Gods imagery for the U.S. market.

For the rabid collector, Chronicle Books is creating a behind-the-scenes hard cover book that will provide further insight into the making of season 1, while Rittenhouse Archives will release a series of trading cards in both the printed and digital format.  Collectors will rejoice with stylized figures from Funko, non-articulated vinyl figures from Titan, and articulated action figures, foam replicas and scalers from NECA.  All of these products will be available globally.

In the U.S. and Canada, Brand Access has signed on to run the official American Gods online store.  The store is scheduled to launch in June and will initially feature limited edition, curated product bundles.  The bundles will include both products developed by Brand Access, as well as other officially licensed merchandise.

In addition, Represent is on board for a global direct to consumer campaign offering fans limited edition graphic tees.  Represent will work with American Gods cast members to design tees in support of their favorite charities.  Each weekend through the rest of the season a new character tee and corresponding charity will be revealed.  Currently, Ricky Whittle’s Shadow Moon tee is available at www.represent.com/shadowmoon, with a portion of the proceeds benefitting Love Is Louder (https://loveislouder.com).  The next American Gods limited edition tee will feature Yetide Badaki’s Bilquis character and will be unveiled on Sunday, May 21st on www.represent.com.

Across Europe, Danilo Promotions Limited is creating a series of calendars and journals, while Pyramid Posters is creating a slate of posters, wall art, mugs and stickers.  Also available in the UK and Irish markets will be apparel from Trademark Products and Brands In, as well as a range of apparel, accessories and more from cult entertainment retailer, Forbidden Planet.

Welcoming additional partners for the American Gods brand, FremantleMedia will be taking meetings in booth C-196 at the upcoming Licensing Expo 2017 taking place in Las Vegas, NV from May 23-25 at the Mandalay Bay Convention Center. 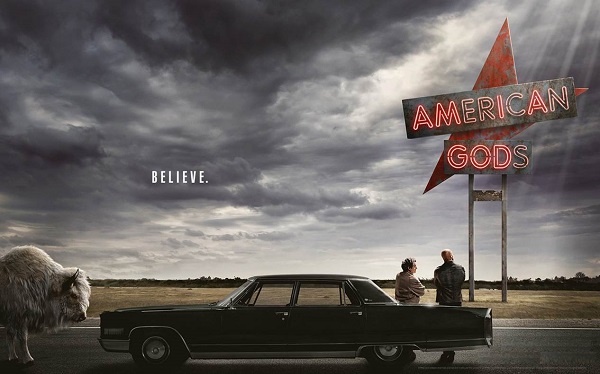