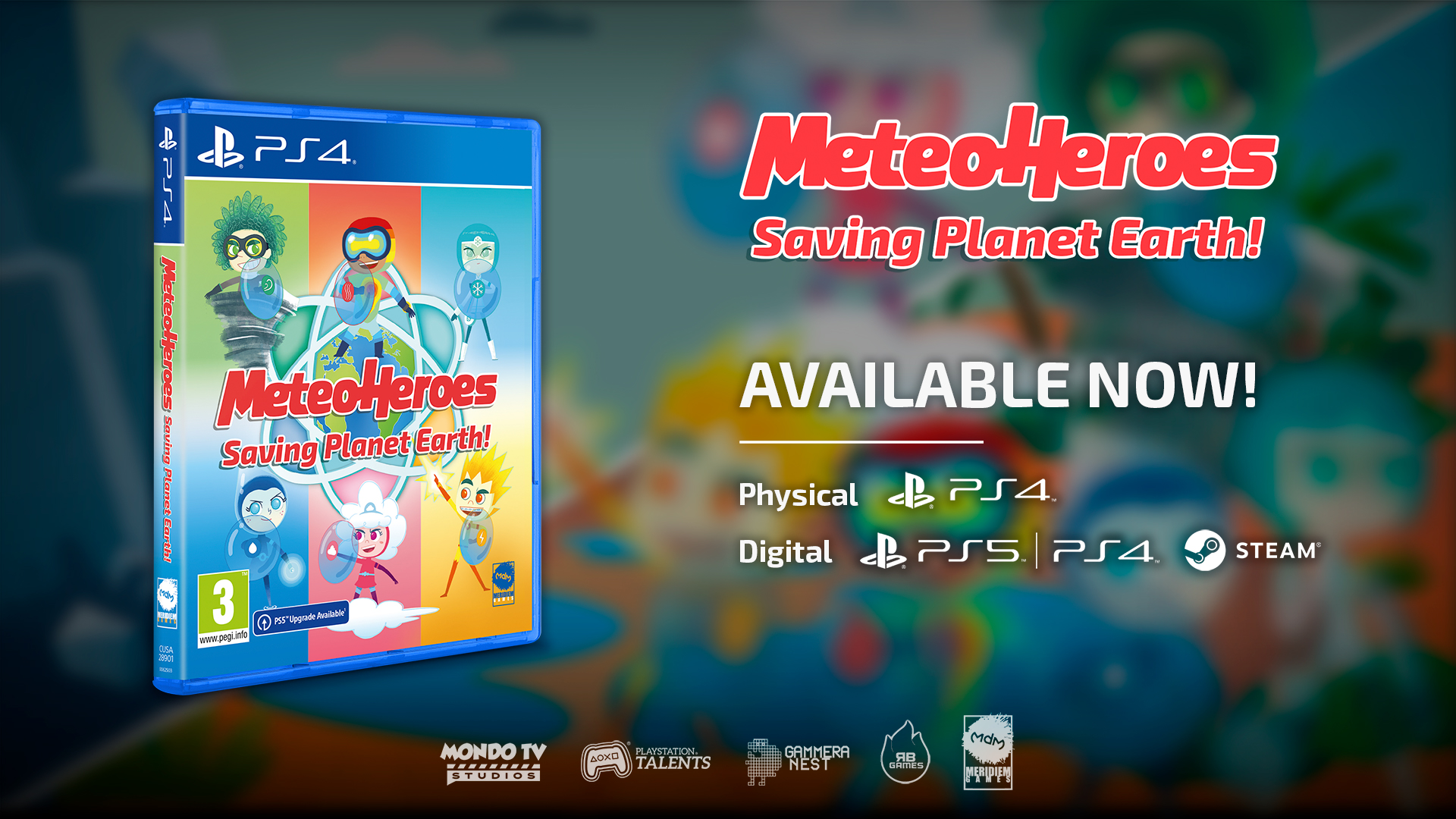 Following the digital launch in February of the first-ever MeteoHeroes videogame on PlayStation® and PC (STEAM platform), Mondo TV Studios, part of Mondo TV Group, one of the largest European producers and distributors of animated content, has announced the arrival of the game MeteoHeroes – Saving Planet Earth in physical format

From 27 October MeteoHeroes – Saving Planet Earth has been on sale as a physical version for PlayStation 4 published by independent distributor Meridiem Games. A significant number of important markets have been confirmed for the launch; they include Spain, Italy, Germany, Sweden, Finland, Denmark, Norway, Iceland, Austria, Poland, Hungary, Greece, Croatia, Switzerland and the United Kingdom. The game will be available in six languages: Italian, Spanish, English, French, Portuguese and German.

The popular environmentally themed animated kids’ show MeteoHeroes, co-produced by Mondo TV S.p.A and the leading Italian weather forecasting centre Meteo Operations Italia (MOPI), has inspired the videogame, which is a co-production between Sony Interactive Entertainment España (SIE España), development partner Gammera Nest and Mondo TV Studios. The MeteoHeroes video game can also boast the support of PlayStation®Talents in its area of PlayStation Alliances, the company’s programme that promotes the development of videogames in Spain.

MeteoHeroes – Saving Planet Earth invites children of all ages to join the much-loved characters from the popular TV series in a fun action platform game. There are enemies to escape from, fast-moving adventures and multiple locations in cities on all the world’s continents, where players will have to find hidden items on the screen that will help them rid each city of pollution and decay.

The development of this video game builds on the qualities that have made MeteoHeroes so original and appealing: an animated kids’ show that is exciting, colourful and fun but that also teaches viewers about the need to protect our planet. In fact, MeteoHeroes is the only cartoon in the world dedicated entirely to climate and environmental issues. Each episode focuses on issues related to ecology and respect for nature through the adventures of six superpowered kids who can control weather phenomena.

Now in its third year of success, MeteoHeroes is available in 180+ countries and 22 languages. In Italy it is among the most successful Cartoonito children’s series. It has enjoyed similar success in Spain on Clan and this year has delighted viewers in multiple markets from Europe, Latin America and lusophone countries to MENA and Singapore. And that’s not all. Thanks to the exclusive partnership of the show’s co-producers with mega hit-maker Kenn Viselman (Teletubbies, Thomas the Tank Engine) MeteoHeroes also made its broadcast debut on PBS in the US in April with an Earth Day Special.

Further underlining the importance of MeteoHeroes in both education and entertainment are two important recent initiatives. The MeteoHeroes – Saving Planet Earth videogame played an important part this summer in the Real Madrid Foundation Campus Experience within the Football and Responsible Gaming programme at Real Madrid City training complex.

In addition, as recently announced, MeteoHeroes is an integral partner in the most comprehensive climate education initiative in the world. This ambitious and much-needed campaign is being launched in the US by Kenn Viselman’s itsy bitsy Entertainment and is supported by PBS stations across America, KIDS FIRST! a Coalition for Children in Media, Mondo TV Studios, Meteo Experts, NAFCE, The San Bernardino Union School District, Scott Noppe- Brandon and Adventure2Learning. The partners in the campaign have committed to launch in 30,000 schools in America reaching 15 million kids, aged 4-to-10 in the USA. But that’s just the start. Following the US launch, the campaign will be rolled out to tens of millions of school-aged children around the world. More organizations and partners are expected to be announced in the coming weeks.

This game is a significant development for Mondo TV Studios, as part of the ongoing expansion of its animation services into new segments that will include video games. The launch of MeteoHeroes – Saving Planet Earth in digital and physical formats both builds on the company’s strength as an animation partner and is a timely move into a fast-growing market: video games are the main entertainment option for millions of people.

Maria Bonaria Fois, CEO of Mondo TV Studios, says: “MeteoHeroes – Saving Planet Earth has been getting strong recognition from the vast fan base of the TV series in its digital format. Now that the video game is also available in a physical version at retail outlets, we look forward to seeing further growth in the reach and following of the MeteoHeroes brand. This success shows, once again, how video games, led by high-quality content, can be a powerful tool for transmitting important values.”