Scotch & Soda to launch collaboration with Felix the Cat

The collection contains 42 lines across men’s, ladies and kids including leather jackets, jersey wear and denim. Susan Meinen (Head Graphic Design Scotch & Soda) selected vintage versions of Felix the Cat from creative archives and hand painted artworks for pieces in the capsule collection, such as a statement leather jacket for women.

The collaboration between Universal Brand Development’s Felix the Cat and Scotch & Soda’s high profile denim label Amsterdams Blauw is the first of its kind, and sees the range showcased to trade this month with an in-store launch in November 2017. The launch will be backed by a consumer PR and marketing campaign across social and print media.

Scotch & Soda, known for its premium positioning within the market place, has over 180 stores and can be found in over 8,000 doors including the best global department stores and independents, and on their webstore.

Felix the Cat made his big screen debut in 1919 and went on to have his own cartoon strip and cartoon series. He was also the first-ever image to be transmitted across the television airways in 1928 and became a TV and technology pioneer and a true pop icon.

The collaboration is sure to touch the hearts of those who grew up with Felix the Cat as well as a whole new generation of fashion conscious consumers who expect only the best from Scotch & Soda.

“We are delighted a partner of the calibre of Scotch & Soda will be launching this unique Felix the Cat collection,” said Matt Tobia, Account Manager, CPLG Benelux.  “The classic artwork, together with the playful nature of Felix, are a great fit with Scotch & Soda’s Amsterdams Blauw brand, making them an ideal partner for this iconic character. The collection is a great mix of innovative denim pieces and sportswear styles. We are confident fashion fans worldwide will be equally enthusiastic when the Amsterdams Blauw Felix the Cat capsule hits stores later this year.”

“Felix the Cat immediately came to mind when thinking of a companion for our denim line Amsterdams Blauw,” said Alex Jaspers, Global Merchandise Director, Scotch & Soda.  “We have always seen him as the anti-hero in the cartoon world, even with his pop-icon status. Felix loves to entertain, he has a down to earth mentality and an unpredictable creative view, three characteristics that resonate with Amsterdams Blauw. We appreciate the support that CPLG and Universal Brand Development have been giving us over the past few months, they’ve helped our friendship grow into a fun capsule collection.” 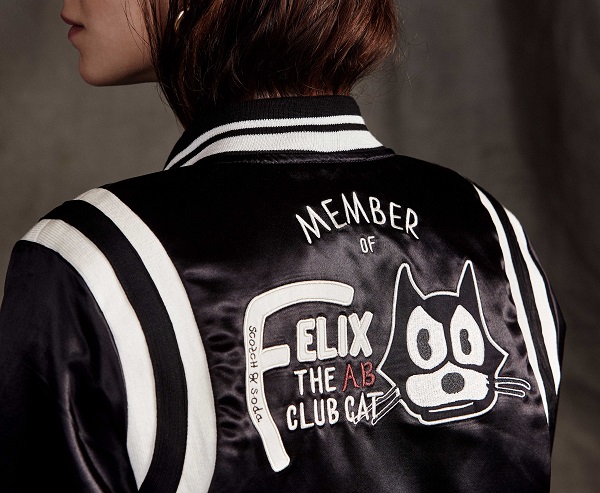