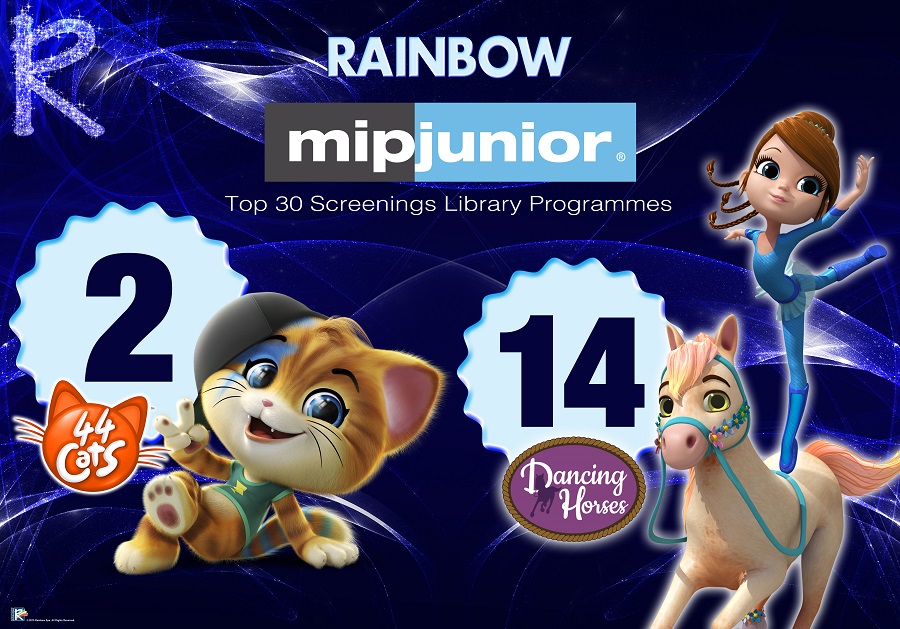 44 Cats – the brand new animation from the Italian content powerhouse – was one of the stars of the show, ranking as the second most screened show, after scoring first place last year.

44 Cats is a Rainbow production in collaboration with Antoniano Bologna and Rai Ragazzi. The 52 x 13’ animated comedy for pre-schoolers is a very entertaining comedy show that celebrates and promotes positive values and an edutainment message.

The show was presented to the market for the first time last year and from the very beginning showed its huge potential, by reaching the top screening position.

44 Cats will debut in Italy on Rai Yoyo this November, whilst further broadcasting deals are confirmed with Nickelodeon for worldwide distribution, Discovery Kids in Latin America, Super RTL in Germany, France Télévisions in France and Carousel in Russia. There has been a great response from across the international TV market, with announcements in the pipeline for major broadcasting channels in Greece, Benelux, the UK and many other territories.

The show follows the daily adventures of Lampo, Milady, Pilou and Meatball – four adorable kittens who form a music band named Buffycats. The protagonists live in the Clubhouse, a garage inside Granny Pina’s house. Their adventures explore the themes of friendship and altruism: the four cats love helping others and always find creative solutions to everyday hitches by dealing naturally with important themes like tolerance, diversity and acceptance.

But 44 Cats was not the only Rainbow star to sparkle at Mip Junior. The Italian production company also presented Dancing Horses, an exciting new animation brand, which ranked #14 in the top screenings.

The show is a 52 x 11’, CGI format musical action adventure for 4-7 year-olds, which tells the tale of three best friends who attend the New York Academy of Youth Dance together and become magical Dance Guardians, working with their very own dancing horses to defeat the King of Silence – who wants to rob the world of music and dance forever.