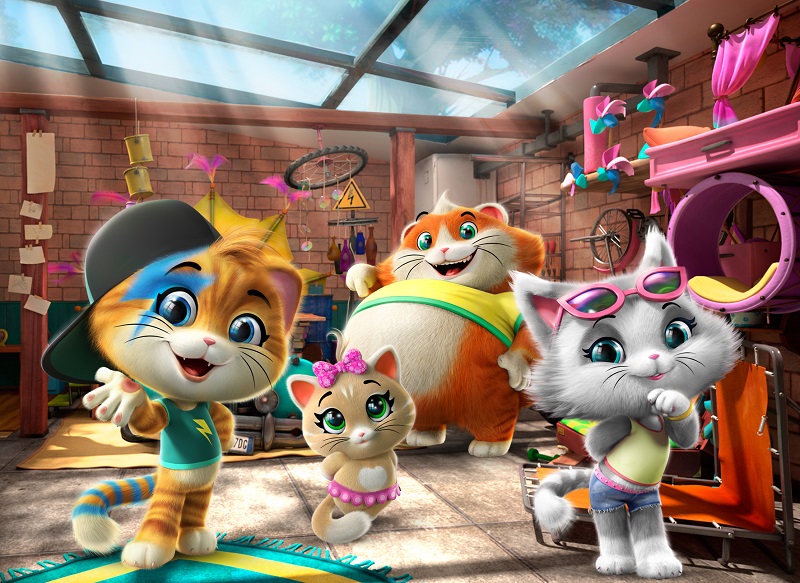 44 Cats set to screen across Latin America on Discovery Kids

Children content powerhouse Rainbow has confirmed that 44 CATS, its new preschool animation, will be shown across Latin America via Discovery Kids, the leading pay-TV network for preschoolers in the region.

The series is slated to premiere in Latin America in 2019 and is Rainbow’s first deal with the famed TV channel.

In Latin America, Discovery Kids has the exclusive representation rights to develop and execute the licensing and merchandising program based on the property, excluding master toy. The network will work hand in hand with the designed Master Toy Licensee towards retail program executions across the region.

44 CATS (52 X11) is a CGI property that follows the daily adventures of Lampo, Milady, Pilou, and Meatball, four kittens who are part of a musical group named The Buffycats. All of them are homeless and take shelter in a garage, which they transform into a ‘Clubhouse.’ When they are around humans, they act like cats, but when alone, they behave like humans. And, just like children, they find the world of human adults confusing and full of strange rules.

The series’ storylines explore themes like friendship and altruism. As such, the main characters love helping others, and this desire to help is what drives many of their adventures. While finding creative solutions to everyday difficulties, the show’s characters also deal with other important matters such as tolerance, diversity, and acceptance.

“We are delighted to announce the 44 CATS deal with Discovery Kids,” says Cristiana Buzzelli, SVP Sales, and Acquisitions of Rainbow Group. “It is exciting to be working with this leading kids channel for the first time, and we are very confident they will do a fantastic job in bringing the show to Latin America, where it’s sure to become a favourite of both pre-schoolers and parents!”

“This new series is a wonderful acquisition for our network, and a great complement to our existing musical programming line-up that includes shows like O Zoo da Zu and Mini Beat Power Rockers,” said Flavio Medeiros, Director of Programming and Acquisitions for Discovery Kids Latin America.

44 CATS is produced in collaboration with Antoniano Bologna. The show’s title was inspired by the famous song “44 Gatti” that won the tenth edition of the international children’s song festival Zecchino d’Oro in 1968, becoming since then one of the most popular children’s songs in Italy.