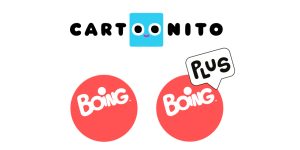 BOING S.p.A – company born from the joint venture RTI Mediaset and Warnerbros.Discovery – leading publisher in the entertainment market on target kids and families with free to air channels Boing, Boing Plus, Cartoonito – and the respective AVOD services, also manages a large portfolio of licenses in Italy

In addition to its own channel brands (Boing and Cartoonito), the offer is very broad and covers all targets: from the pre-school segment with the white Simone, a worldwide publishing phenomenon, to young adults with the classic Holly and Benji and 80s animated series including Hello! Spank, Georgie, Little Pollon, Cat’s Eyes, loved by entire generations of audiences.

To complete the proposal of Boing S.p.A., there are the Cartoon Network franchises known and acclaimed all over the world, such as We Bare Bears, Ben 10, The PowerPuff Girls, Adventure Time, Steven Universe, on which the Licensing program is going on the territory.

Last but not least, the Cartoon Network Originals, among which there are Johnny Bravo, Cow and Chicken and Courage the Cowardly Dog.