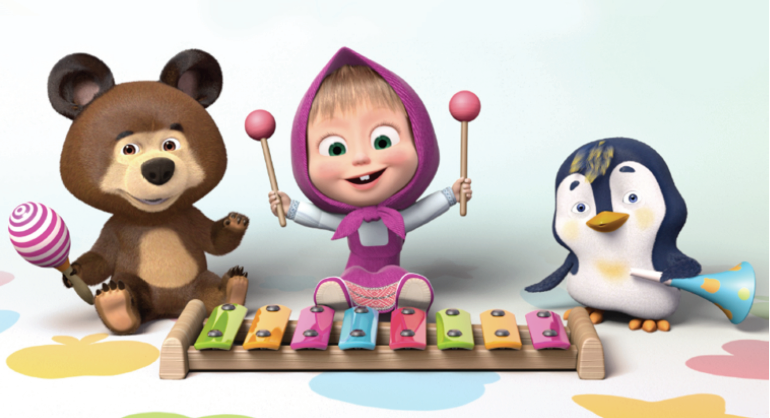 “Tg2 Storie” and “Rai News 24” dedicated a report to Animaccord’s animated series, Masha and the Bear, revealing some of the most interesting aspects behind its creation and production

The report aired on Rai2’s program “Tg3 Storie” on the 27th of Dicember 2020 and on the “RAINews-24 channel”, during one of the daily news reports on the 31st of Dicember 2020 and on the 1st of January 2021. Masha and the Bear episodes are on air every day on Rai YoYo, the channel that contributed to the taking off of the series thanks to the intense schedule since its arrival in Italy and that still today keeps fans at the highest point of interest. RaiPlay, the web-portal and Rai App version, plays a key role in the series success as well, allowing to view the episodes at any time.

The TV report, that aired on the Rai2 channel, presented a glimpse of some of the curiosities behind the animated series Masha and the Bear, known worldwide and dubbed in 42 different languages. Starting from how it all began, to some of the making processes, it offers an overview of what happens behind-the-scenes of the world’s successful series.

Thanks to Maurizio Distefano Licensing, Masha and the Bear, has a very active licensing program in Italy, with licensees for every product category, ranging from Easter eggs to olive oil, from footwear to children’s masks, from toys to publishing. The products of the licensees are also available online, in particular on Amazon with the dedicated Masha and the Bear shop, as well as on the Toys Center website. The Masha and the Bear experience is also immersive in-store: Toys Con Te has, in fact, dedicated an exclusive exhibition space to the series.

Maurizio Distefano, President of MDL, stated: “Masha and the Bear is a certainty on all points, the high quality of the series reflects automatically in each of its projects. A must for children’s television programs, which appreciate its proposal both in terms of content and products“.

Masha and the Bear, on air every day on Rai YoYo and Rai Play where it was the second most viewed Kids title during 2020, boasts 3 million subscribers on the Italian YouTube channel and 5.4 million followers on the Facebook page, continuing to prove its strength in the market. The series has established the Guinness World Record as the most viewed cartoon on YouTube, its success continues to grow to the point that one of its latest episodes entered the HIROSHIMA 2020 International Animation Festival for its special list of programs titled “BEST OF THE WORLD” and according to Parrot Analytics, an international research agency, it is included in TOP-5 most on-demand kids shows in the world as of December 2020.