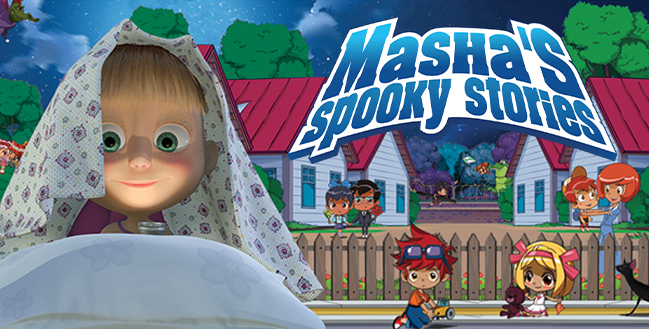 Maurizio Distefano Licensing, which manages licensing for the Masha and the Bear brand in Italy and Switzerland on behalf of the Ink Group, has hailed the success in Italy of Masha Spooky Stories, the latest spin-off from the fantastically popular Masha and the Bear animated series. Rai Yoyo has been broadcasting two episodes of Masha Spooky Stories from 10.10 every evening since 11 August.

Masha Spooky Stories puts the spotlight on little Masha who, in each episode tells a story about a specific childhood fear and, in her friendly, funny way, encourages children to overcome it.

Masha’s Spooky Stories is made up of 13 five-minute episodes in which Masha tells stories that focus on everything from handwashing and illness to insects and the dark and cheerfully and comfortingly reassures her audience that there’s nothing to worry about. With the help of colourful images and entertaining characters — and of course the funny, friendly Masha — children are helped to overcome their fears and enjoy a good night’s sleep.

The success of the two new series is expected to add to the licensing opportunities and the graphic library available to licensees, further expanding the reach of this incredibly popular brand.

Maurizio Distefano, President and Founder of Maurizio Distefano Licensing, said: “I’m thrilled with the progress of the Masha and the Bear brand over the past year and the expanded output of high-quality shows from producer Animaccord. The continuing success of Masha and Bear and the diversified output of Animaccord, putting Masha centre stage in her own shows, has further consolidated the popularity of Masha with her young audience.”