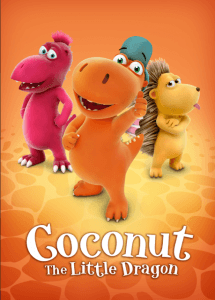 Team Entertainment has signed for the kids’ brand “Coconut The Little Dragon“. The expert in managing international brands like “Calimero”,  “Grisù”, “Spike Team” or “Pac-Man”, will represent the 1st and 2nd season of the TV-series as well as the licensing programme of the orange dragon exclusively in Italy.

Based on the popular book series by German author Ingo Siegner, the adventures of “Coconut The Little Dragon“ are a global hit (books published in more than 22 countries, hundreds of licensed products). With top market shares, the CGI TV-series continues the success of Coconut’s first feature film (more than 1 M viewers in the German-speaking territories) – both productions of family entertainment specialist Caligari Film.

The German market leader in animation is currently working on the 2nd “Coconut” feature film as well as 2nd season of the TV-series and is also producing the first feature film of famous kids’ brand “Capt’n Sharky” (release in 2018).