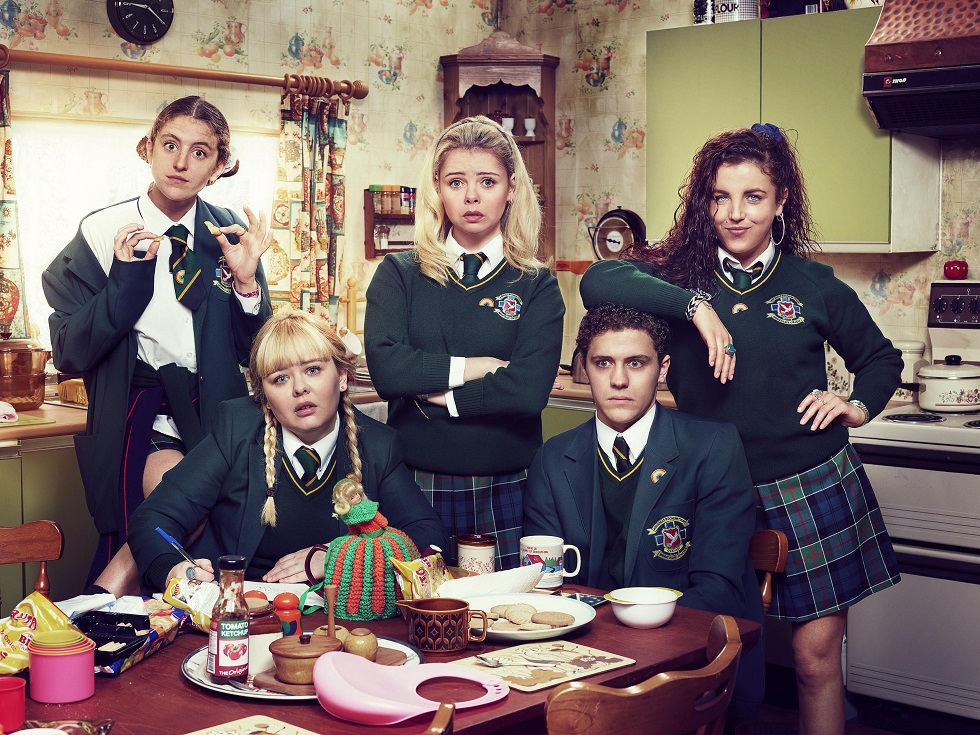 For the UK and Eire, Park Agencies, a leading designer and developer of licensed merchandise and apparel for brands and licenses, will produce a line of adults’ and kids’ Derry Girls t-shirts, sweatshirts and hoodies aimed at mass-market and mid-tier retail as well as online outlets. It is also planning an exclusive range of bags and mugs.

Also for the UK and Eire markets Danilo, a major European publisher of social stationery, is planning a varied Derry Girls range that incudes wall calendars, greetings cards, and gift wrap and bags. These will be widely available in major groceries along with card and bookstores.

Thirdly, leading wall art and giftware licensee Pyramid International will be developing a range of Derry Girls wall art, prints, drinkware and gift items to be sold across mass-market and mid-tier retail as well as speciality entertainment stores and online.

For Northern Ireland and Eire, O’Neill’s Irish International Sports Co Limited, the largest sportswear manufacturing company in Ireland, are producing a range of adult sports jerseys available at its stores and on its website. The launch of the range this summer is being supported by an extensive marketing campaign.

Derry Girls was dubbed an instant sitcom classic after series 1 aired in early 2018 and series 2 was another big success following its launch on Channel 4 in March this year. Series 2 episode 1 consolidated 3.2 million viewers, the network’s best rating for a comedy in 15 years, and the series has won multiple awards including Best Scripted Comedy in the RTS awards 2019 and Best Comedy in The Broadcast Awards 2019. Series 3 has already been commissioned and scheduled by Channel 4.

Derry Girls’ sharp and funny dialogue and strong characters make it a hugely appealing watch, while its poignant political setting sets it apart from other coming-of-age comedies. This story of four spirited teenage girls (and one awkward teenage boy) attending convent school takes place against a backdrop of the bomb threats, armed soldiers and roadblocks of 1990s Northern Ireland, drawing upon the personal experiences of its writer, award-winning stage and screenwriter Lisa McGee.

The success of the sitcom has now inspired a licensing campaign, managed by Rocket Licensing. Along with the deals in key categories so far announced, Rocket will be focusing on nightwear, loungewear, bedding, dress-up, gifting and homewares, stationery, accessories, health and beauty, and games and puzzles.

The core market for licensed product is expected to be teen and young adult women from 16-30, who form a strong part of the show’s audience. However, its cross-generational appeal gives Derry Girls great licensing potential, with the show also proving popular among older adults and receiving a massive response in Northern Ireland and Eire in particular.

Rob Wijeratna, Joint Managing Director of Rocket Licensing, says: “Lisa McGee’s comedy series, with its fantastic humour, nostalgia and memorable characters, has become a true phenomenon. And it is already making a strong showing in licensing by attracting four major licensees in key categories. The future is clearly very bright for Derry Girls – both as a show and as a property – and we are excited to see it grow.”