In the world most important fair for the cycling sector, Eurobike, held in Friedrichshafen from August 29 to September 4, Pininfarina, with two important partners, De Rosa and Diavelo (Accell Group) is again two-times protagonist. The first thanks to the world premiere of two brand new bikes, the exclusive De Rosa SK Pininfarina Luxury bike and the innovative E-voluzione electric bike and the second according to the judgement of the experts in hard competitions. In fact, during Eurobike, the De Rosa SK Pininfarina bike was awarded with the first place in the Hyper Velo de l’annee 2016/2017 and the E-voluzione bike received the Eurobike Award.

The collaboration between two ambassadors of Italian style, luxury and technological innovation, DeRosaand Pininfarina, enters its second year having yet again set another standard for excellence with two additions to the DeRosa SK Pininfarina lineup: the SK Luxury and the SK Disc.  The SK Luxury was developed with exclusive details – triple layer paint, non-slip textured handlebar and saddle, a drivetrain created with Zero Friction technology – that we believe surpass the expectations of the most discerning buyer.  The colors – Black Caviar, Diamond Silver, Pininfarina Blue – bring the words “understated elegance” immediately to mind.

True luxury products must be accompanied by luxury accessories, hence the creation of the SK DeRosa, luggage designed and built specifically to carry the SK in safety with style, and the Body-Bike Suitcase, sewn with the same single needle stitching found in the highest quality tailored clothing which, when combined, all quietly and humbly say “Made in Italy”. The body is designed within the Pininfarina design center on the advice of Cristiano De Rosa and borns thanks to the cooperation with Castelli, the company that  is pioneering and excellence in technical clothing sector.

De Rosa SK Pininfarina, one of the top selling bikes in Europe in 2016, has been well regarded by the cycling press, having won the absolute first prize awarded by Hyper Velo for the 2016/2017 model year, where a panel of experts under the Chairmanship of the famous French champion Bernard Thévenet, gave awards to 9 of the 120 bikes tested this year by the magazine Acheteur Cycliste.  In March the DeRosa SK Pininfarina also won in the category Sports and Leisure of the Born Awards.

E-voluzione is the first electric super light bike born from the collaboration between Pininfarina and Diavelo. An electric bike able to make a real evolution. In design. In technology. In performance. In comfort.

“In the DeRosa SK Pininfarina Luxury we have created new milestones in design, technology, luxury and the use of innovative materials which, in combination, have also created a single innovative milestone” said Paolo Pininfarina, President of the Pininfarina Group.  “In DeRosa we have found and extraordinary partner with whom we are creating an entirely new world geared specifically for the discerning cyclist who loves the combination of Italian styling and performance. E-voluzione represents a perfect synthesis of our spirit: sporty character and eco-friendly soul. Sporty and dynamic, a harmonic bike able to guarantee high performances and great comfort.”

“As soon as we conceived of and began to create the DeRosa SK Pininfarina we immediately realized that this would be a project for the long-term”, says Cristiano DeRosa, Chief Executive Officer of DeRosa Bikes.  “The current offerings are the result of our process of very detailed planning, research and development that provides us the framework with which we incubate and develop ideas that will continually generate innovative solutions for the future”. 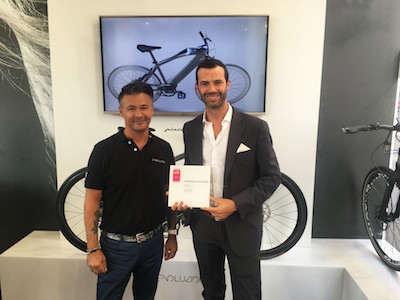